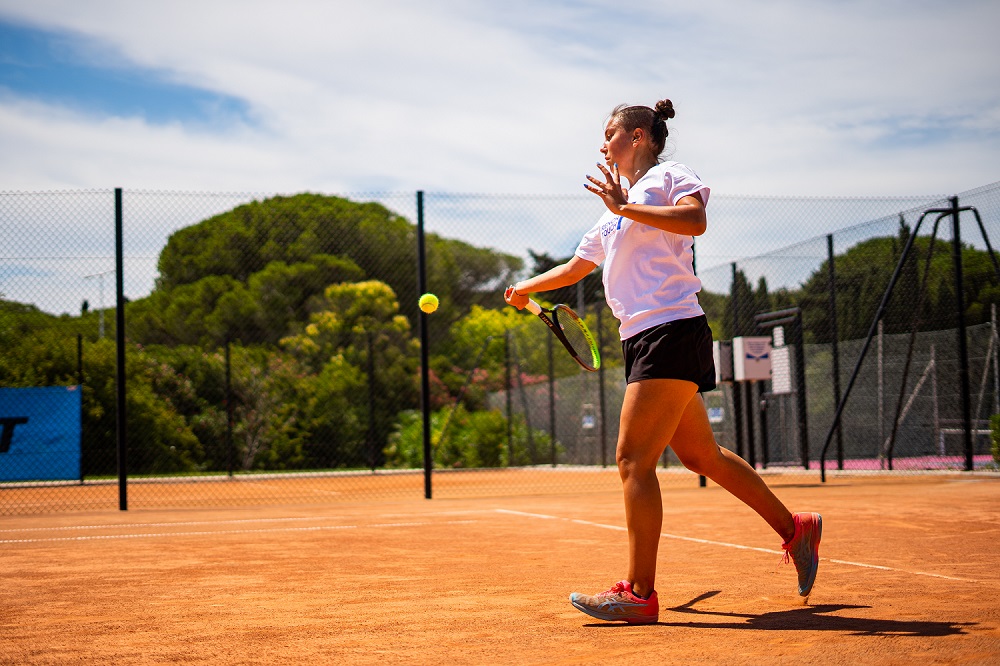 ENTER OUR SCHOOL and build your future

The programme has been conceived to allow for an intensive practice of Tennis and competition at a high level, without jeopardising the good conduct of studies. The Academy objectives are high and the pace is intense.

14
years
Filed
15
in the class of
Second

16
years
Filed
0
in the class of
Premiere

12
years
Filed
30
in the class of
Fourth

Achieving the right level of competition to enter a college in the U.S with a tennis scholarship

Acquiring a solid level of English proficiency and of the English language.

The placement into American university with a tennis scholarship.

The sport programme is articulated around 4 major pillars:

The sport season is articulated around 5 distinctive periods :

The progress made by the academicians is monitored and evaluated according to the sporting and academic objectives defined at the beginning of each term.
A complete and detailed report is communicated to the player each term. This report is an essential support, a basis for discussion with the academician's family during the parent-teacher-coach meetings that take place each term.

Every month, tests are held in the form of challenges, on and off the court, enabling each student to develop his/her competitive spirit.

Students are regularly stimulated through different challenges which contribute to forging their character by strengthening their appetite for effort - the engine to fuel their mental capacities.

Such as supervised boxing, judo, or wrestling are organised on a regular basis to hone the competitive spirit of every student.

Organised over 3 days at the very beginning of the year, the integration weekend is an obligatory gateway for all students. It includes long distance challenges in teams which enable students to measure their physical and mental capabilities. It implies camping, spart an living conditions which facilitate the social links between students.

Led by Thomas Scherle, physical training is an essential component of training at the academy and allows for faster progression. All students at the academy train 1h30 per day and adopt essential routines. The nature of the training and its intensity depends on the period and the profile of the player. Generally, the schedule is divided into 3 distinct phases (opposite).

A training in 3 phases 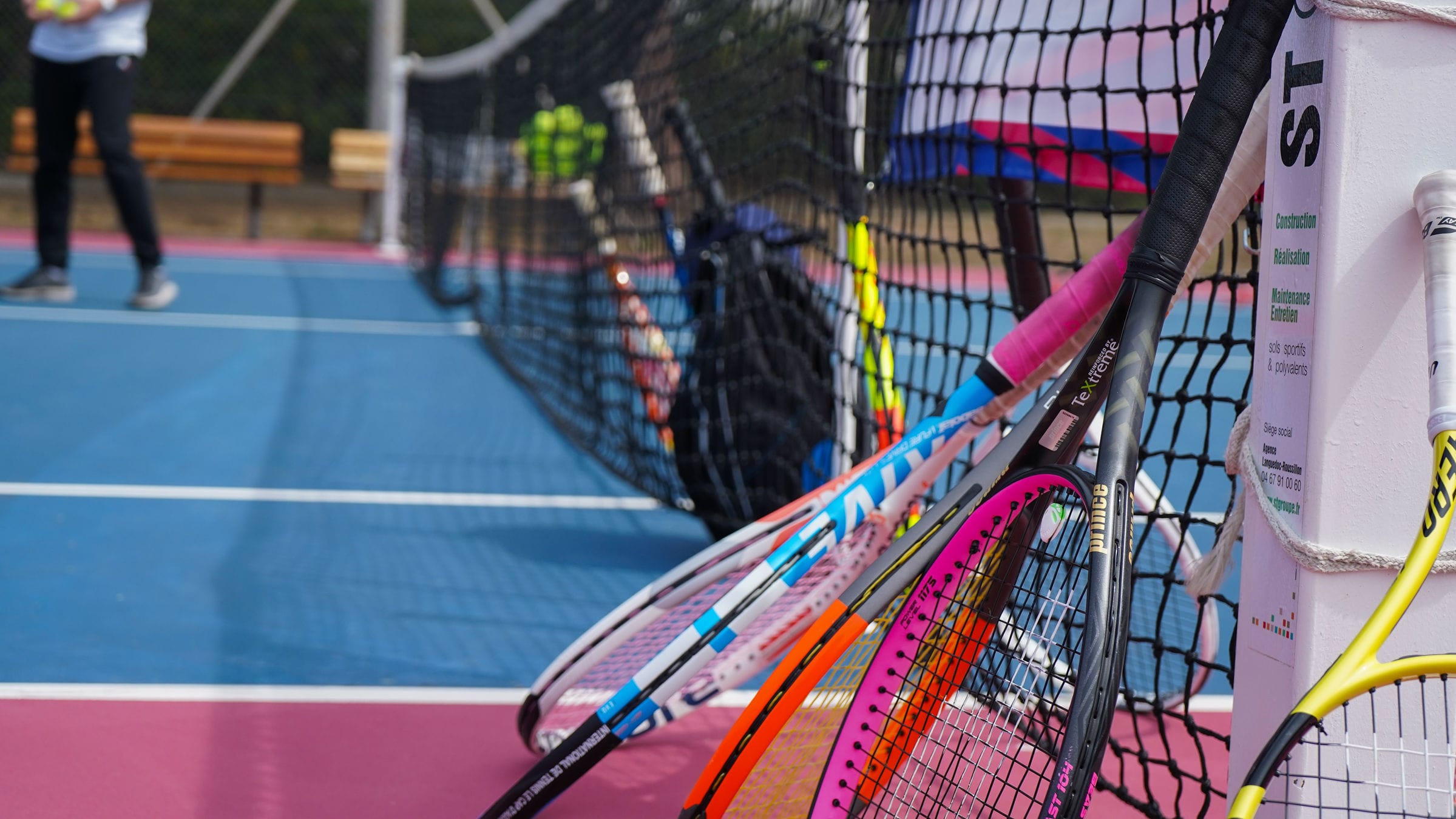 Online courses conducted by our Tutors

Our American High School is a US private school which delivers quality education and is accredited bySACS CASI (AdvancED/Cognia) and whose courses are NCAA approved.Students who complete their US high school programme in NCAA approved courses become eligible to apply for scholarships/grants for their college/university education

THE USE OF TIME

In the mornings, 15 hours of studies allocated over 5 days, combining all the required subjects +1 hr of obligatory studying in the evening for boarders.

In the afternoons, 4 hours of training Tennis/Fitness 5 days a week, further strengthened by morningtraining sessions between 7.30 and 9 AM twice a week.
The timetable has been specifically conceived to enable students to conciliate studies and tennis in the best possible conditions. 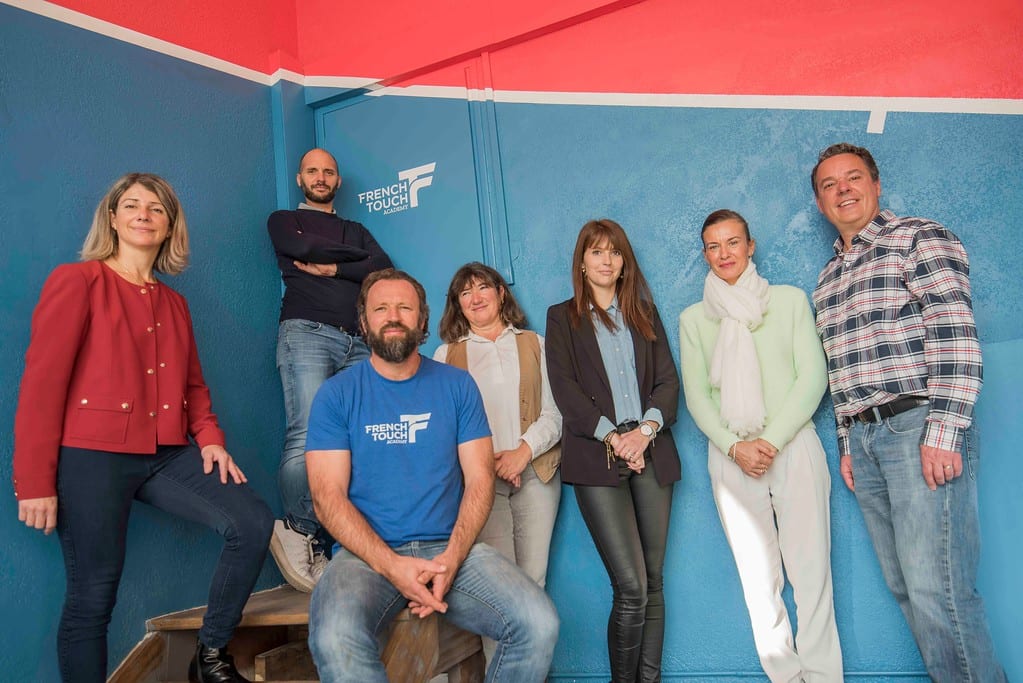 The proximity for an efficient teaching

With 18 hours of classes per week, classes are organised by level and in limited numbers (6 to 10 students per class maximum). This proximity speeds up the teaching process and reinforces its effectiveness.

English, an essential component of training

Located 800 metres from the sports complex, the boarding school consists of 50 beds, classrooms, a cafeteria, and play and rest areas. 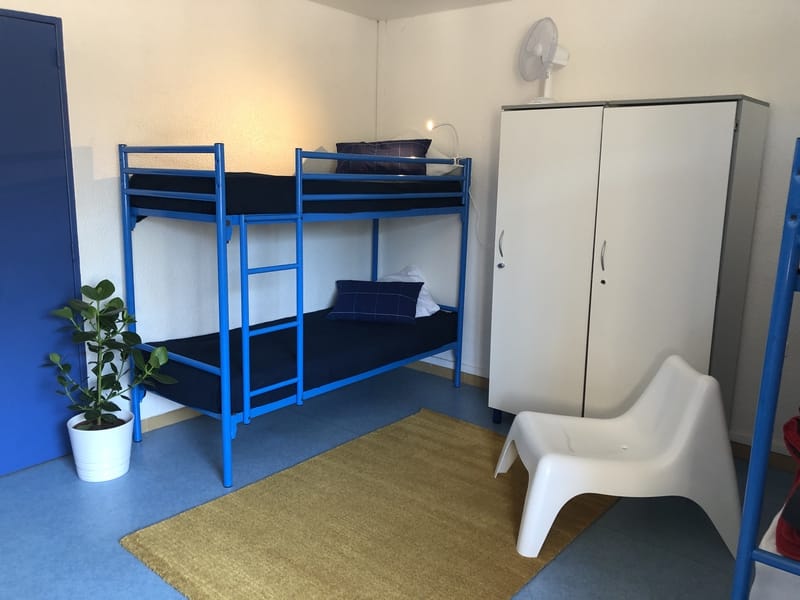 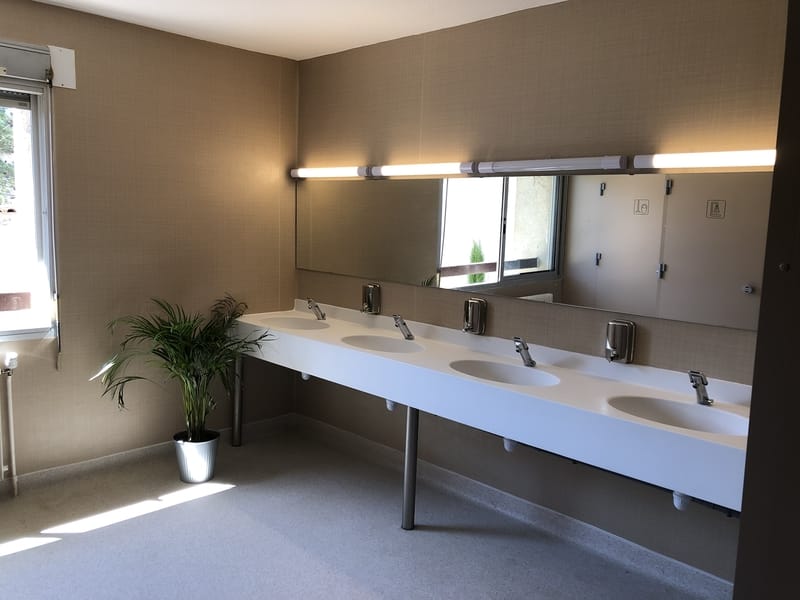 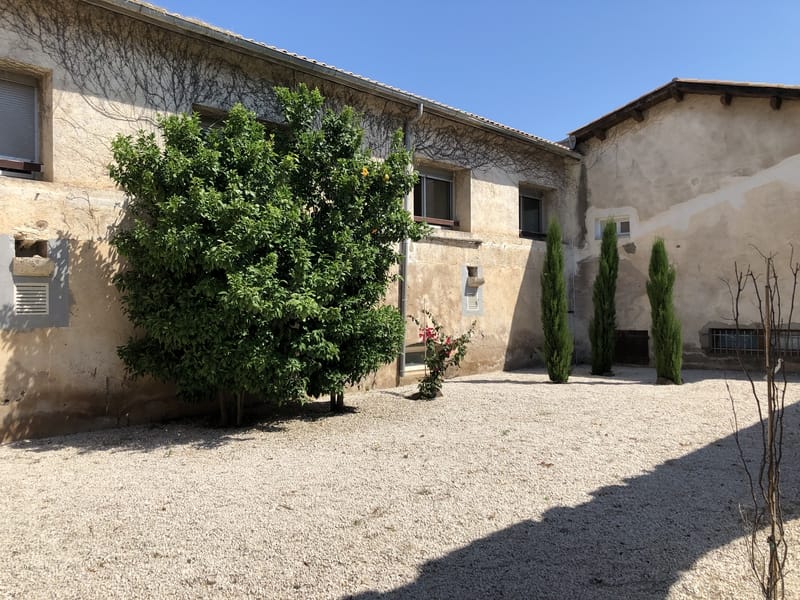 Through our partnership with the John Newcombe (former triple Wimbledon champion and World No1), located in Texas, our students are given the opportunity to experience a full one month immersion within the academy in the heart of the USA.

The ‘Hérault’ region benefits from a well provided calendar of tournaments. Players have a choice of more than 45 ‘Open’ tournaments throughout the year, as well as many International youth tournaments (ITS and -14 years old) located in the southern region or in the north of Spain (2 ½ drive by car).

Competition is one of our main priorities

Because competition allows each player to measure progress and improve mental strength. It is also a unique opportunity for our coach to evaluate player’s progress in real match conditions.

15 official tournaments between September and June

On average, students take part in more than 15 official tournaments between September and June, more than in any other academy. To which, one can add up to ten additional tournaments during the summer.

It is approached in 3 steps:

- Our coaches take the time to get to know and analyze the behavior of each player on and off the field during the first 2 months in order to judge the need for support.

- Group sessions are organized to initiate reflection and awareness of the work to be done to achieve his goals.

- If the need is expressed by the player or advised by the coach, individual interviews are organized.

A -14 and -18 years old national/international competition programme is also available for players who have attained the necessary level (top 20 national minimum).

All the players who integrate the Academy benefit from a medical follow-up, which includes physiotherapy with one of the best sport physiotherapy specialists in the region.

In depth medical check up

Upon arrival, all players must pass a complete test that allows the sports team to carry out a thorough sports medical analysis, which is used throughout the year for better medical monitoring.

In case of injury

Students also have access to physiotherapy care throughout the year in case of injury.

With boarding
Without boarding

Option US Training Camp consult us

Option US Training Camp consult us

A SPRINGBOARD FOR COLLEGES IN THE USA

The gateway to the USA is part of the Academy DNA.Each student is prepared in anticipation of his integration to an American university.Everything is done to optimise the chances of a successful integration.

What is the academic level and tennis ranking required to join the tennis studies section of the French Touch Academy?

We carefully study all the files that are transmitted to us because we believe that motivation and state of mind are an integral part of success. A satisfactory academic level is required because the intensity of the program is sustained and the expected level of demand is high. A tennis player who trains regularly and has already started competing has the possibility to apply to join the French Touch Academy's tennis studies program.

The schedule is optimized because young players have no time to lose! Lessons take place at the accommodation located 5 minutes away from the International Tennis Centre where tennis and physical training takes place. We welcome middle school, high school and BTS students for the French section and also offer the American curriculum for foreign or bilingual students. Depending on the sections, ages and levels of tennis, a personalised timetable is proposed, including competition times, medical follow-up and physical recovery. The cohesion of groups, the integration of each one and the well-being of our academics contribute to their success: moments of play, sharing and relaxation are arranged and integrated into the schedule.

How much does a year at the French tennis academy cost? Can I benefit from a scholarship?

All the prices of our tennis study sport are detailed in the 'prices' section. As an example, a year at the French school costs 18 000 €. This price includes all tuition fees, sports training and competition monitoring. We have at heart to develop our sport, to get involved in the success of the best hopefuls and therefore to encourage the profiles of players with potential. Applications for exceptional financial aid may be examined, depending on the sporting level of the player, in line with the young player's family project.

What is the 1st step for a potential integration within Tennis-Studies?

All applications are studied with great attention by the school and sports management team. After an in-depth telephone interview to evaluate the candidate's academic level and motivation, a week of testing is scheduled. This test week takes place at the Cap d'Agde International Tennis Centre, and enables the level of tennis to be assessed, as well as the candidate's room for improvement. School tests and in-depth interviews are also scheduled.

Is there a Post-Bac formula?

Yes, we offer a BTS formula for players who have already obtained their baccalaureate. This formula is particularly favoured by young people wishing to prepare a departure to an American University, thanks to a scholarship. One or two years of preparation are very useful, because they allow to significantly improve the level of tennis and thus increase the amount of the scholarship. It is also the time needed to prepare the application files, pass the mandatory exams and finalize the administrative part of the departure (when this was not possible before, for young people who have not followed the Tennis Etudes course of the French Touch Academy).

What future after a sport study tennis?

Depending on sporting and academic results, but above all on the wishes of the young graduate, many options are available to young people who have followed the tennis studies course. After obtaining the baccalaureate, and an adequate sports preparation, one of the options that we strongly encourage is the integration of a University in the USA, thanks to a scholarship. Others will prefer to try their luck on the professional tennis circuit (ATP/WTA/ITF). Whatever their choice, the whole team of the academy is committed to do everything possible to accompany the young person in the pursuit and success of his sporting and/or professional objective.

leisure at the highest level
join the 'french'.

Passionate coaches, a unique infrastructure, varied and affordable tennis programs, all in the heart of the seaside resort of Cap d'Agde.

OK
This site uses cookies to enhance your experience.